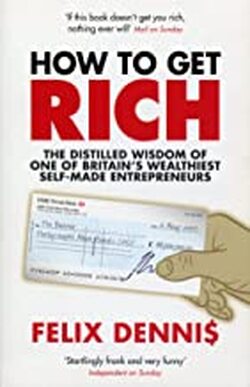 A man who started as a drop out and became one of the richest men in the uk, learn from him principles on how to create long term wealth.

Felix Dennis was imprisoned in 1971 as co-editor of OZ magazine. After his acquittal on appeal, he founded his own magazine publishing company in 1973 and made millions with the sale of Personal Computer World and MacUser in the mid-eighties. Today, Dennis Publishing remains a privately owned company with headquarters in London and New York City. Titles include The Week, Auto Express, Computer Shopper and Maxim. The annual Sunday Times Rich List estimates that Felix Dennis is the 65th richest individual in the UK. Following a life-threatening illness, his first collection of poetry, A Glass Half Full was published by Hutchinson and the second, Lone Wolf, in 2004. His third collection, When Jack Sued Jill, was published by Ebury Press in November 2006.