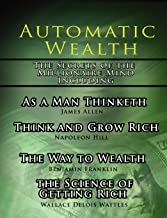 A collection of wealth creation lessons in one book- a must read for those serious about creating long term wealth.

Oliver Napoleon Hill was an American self-help author. He is known best for his book Think and Grow Rich which is among the 10 best selling self-help books of all time. Hill's works insisted that fervid expectations are essential to improving one's life.

mes Allen was a British philosophical writer known for his inspirational books and poetry and as a pioneer of the self-help movement. His best known work, As a Man Thinketh, has been mass-produced since its publication in 1903.

Wallace Delois Wattles was an American New Thought writer. He remains personally somewhat obscure, but his writing has been widely quoted and remains in print in the New Thought and self-help movements.