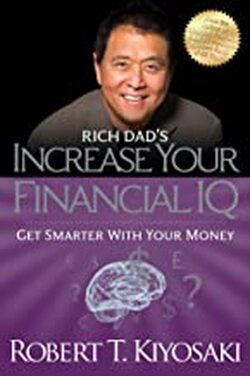 Financial IQ is a weakness for around 70-80% of people, evident due to the simple fact that the middle class is collapsing with time- a must read for anyone looking to make the switch to becoming rich.

Robert Kiyosaki, author of Rich Dad Poor Dad - the international runaway bestseller that has held a top spot on the New York Times bestsellers list for over six years - is an investor, entrepreneur and educator whose perspectives on money and investing fly in the face of conventional wisdom. He has, virtually single-handedly, challenged and changed the way tens of millions, around the world, think about money.In communicating his point of view on why 'old' advice - get a good job, save money, get out of debt, invest for the long term, and diversify - is 'bad' (both obsolete and flawed) advice, Robert has earned a reputation for straight talk, irreverence and courage.Rich Dad Poor Dad ranks as the longest-running bestseller on all four of the lists that report to Publisher's Weekly - The New York Times, Business Week, The Wall Street Journal and USA Today - and was named "USA Today's #1 Money Book" two years in a row. It is the third longest-running 'how-to' best seller of all time.Translated into 51 languages and available in 109 countries, the Rich Dad series has sold over 27 million copies worldwide and has dominated best sellers lists across Asia, Australia, South America, Mexico and Europe. In 2005, Robert was inducted into Amazon.com Hall of Fame as one of that bookseller's Top 25 Authors.